Barge Lady meets the owners of an incredible new spa-

Located right in the Mersault Vineyards in Burgundy! 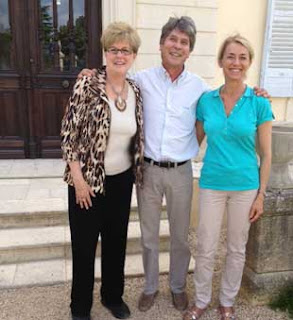 We are standing on the oldest Cistercian vineyard in Burgundy – vines were planted in 1051 – and we are previewing a hotel-spa which will make new history on these ancient acres. La Cueillette is the vision of Drs. Jean and Corrine Garnier, local doctors who fell immediately in love (the French call it “coup de foudre,” translated as bolt of lightning) with this historic chateau and bought it the day they saw it! Dr. Jean Garnier grew up in Burgundy, has memories of picking grapes, and wanted to create a sanctuary where guests could experience the area in a relaxed and healthy way. Here I am at right with Drs. Jean and Corinne

Chateau de Citeaux was built in 1865 by a wealthy wine merchant, but had fallen into disrepair. A major job in itself was re-creating the sumptuous public areas, such as the main dining room with its incredible frescos and D’Aubusson tapestries. Other welcoming rooms include the rustic bistro, with a large working fireplace and the boudoir, which will be available for private parties. Seventeen rooms and two suites were created in a modern style which does not attempt to compete with the public areas. This was a good idea, as guests can retreat from the 19th to the 21st century in minutes, enjoying very light and bright accommodations and up to date amenities.

The brand new spa wing is incredible, with a blue-tiled swimming pool and several treatment rooms. The theme of the spa is “fruititherapy,” with a range of treatments and beauty products derived from the fruits of Burgundy, most notably grapes, red currents and black currents. Treatments include messages, scrubs, facial masks and the like and the wide range of the products used will be available to purchase at the spa or on-line. 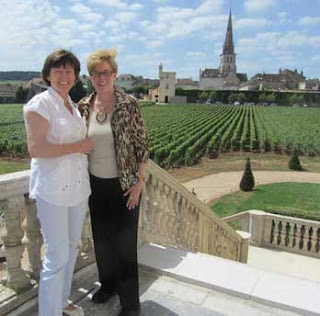 We were shown around by Director of Marketing Julie Steele (Here I am with Julie on one of the terraces overlooking the vineyards), who introduced me to some of the top staff being assembled, including Chef Laurent Couturier, who has worked at several Michelin-starred restaurants, and the very experienced Head of Reception coming from a top hotel in Beaune.

Chateau de Citeaux is perfectly located for a few days of touring the Cote d’Or by car. Or explore on one of the bicycles thoughtfully provided. Right at the hotel, taste wine in an ancient cellar, enjoy gourmet cuisine in refined surroundings, and watch the sun set over the vineyards as the lights of the nearby village come on. In short, combine history, relaxation, healthy living, and gourmet cuisine all in the most romantic surroundings of Burgundy!

La Cueillette Hotel-Spa-Resort Chateau de Citeaux
21190 Mersault France
Opening September 2012
Spa packages from two days to one week are available, as are room-only rates from 180 euros to 300 euros per night. All of the bedrooms overlook the vineyards, the park or the village of Mersault and its magnificent church. Breakfast is additional. There are two restaurants at the Chateau: La Cueillette Gastronomic and Le Potager Bistro.